The word Bulimia means ‘appetite of an ox’, the word Nervosa is ‘of the mind’ or ‘of the nervous system’.

Bulimia has no barriers when it comes to age, gender or race.

Eating disorders have the highest mortality rate of any other mental health illnesses with a staggering 20% of people dying every year as a direct consequence of their illness or through suicide. These are staggering statistics.

It is also a psychological illness that has a major impact on a person’s physical and mental health, and a profound effect on anyone who is part of their life!

Bulimia is when someone eats huge amounts of food at any one time (binging) and then ridding themselves of that food through by vomiting and laxative abuse (also known as purging) or over exercise.

With Anorexia the person will evaluate themselves through body weight and shape. With Bulimia, only when a binge has taken place they will panic and want to rid themselves of the food they have eaten in case it affects their weight.

Eating disorders in general are often linked with a low self esteem and low self worth. Someone suffering may feel that they have no control over something in their life and the only thing they feel they have control over is their food and behaviours.

They have a false belief that by managing body weight and shape they will be happier.

In truth they are chasing the impossible because once they reach a weight the problems are still there. The individual strives for a bigger weight loss and nothing has changed until the weight loss becomes a medical risk and their self control is ‘out of control’.

If the binging is out of control and the compensatory behaviours are excessive then the control is lost and the eating disorder has total control over you!

If someone is at a critical level or life threatening level then that person’s medical condition becomes the priority and emotional support or counselling will not be offered until that person is stabilised and their weight is increased to an acceptable level. This will vary depending on the area in which you live but it is considered that a BMI of over 16 is acceptable to start therapy.

A good outcome for recovery is when a established eating pattern is in place, weight is improving at a steady pace, everyone involved is socially aware of their suffering and the steps are put in place to make changes in their life.

If someone has had a lifetime of living with an eating disorder then often it is more realistic to gain management of their illness, feel very proud of changes they have made and the responsibility they have taken to ensure their medical safety.

Any improvement should be seen as a positive with focus being on the ‘cup is half full not half empty’!

What is a binge?

Someone in ‘binge mode’ will do so on high carb, high sugar type foods. They often eat things in a very controlled and systematic way, and will have planned the ‘binge’ and often foods are eaten in a specific order. The food is often eaten with ferocity too.
Once the food has been eaten there is an overwhelming need to rid themselves of that food as they panic that they may gain weight. Ridding themselves of the food is known as ‘purging’. This may be through vomiting, laxative abuse, diuretics (water tablets) or exercise. The purging behaviours are often referred to as ‘compensatory behaviours’.
Try keeping a food diary, this may help in making a connection with food and mood – what was happening for you at the time of your binge, what were you feeling, what were your thoughts.
In the case of Bulimia Nervosa, if the compensatory behaviours are out of control and the binge purge cycles are frequent and excessive, the person may become medically at risk through low potassium levels.
Potassium is a chemical that regulates the heart; if potassium levels are low the sufferer may be at risk of heart irregularities and, at worst, heart failure.
Sufferers will use food and food issues as a coping strategy for something they feel they have no control over. They often feel they cannot control what is happening within their life so the one thing they can control is their food.

We have talked about an eating disorder being about feelings not about food – when someone is in binge mode they feel that their problems disappear as the high carb / high sugar has a direct affect on the base of the brain. Have you heard of the sugar rush?

Sadly when the binge is over and the compensatory behaviours (i.e. vomiting and laxative abuse) are finished, the guilt and shame takes over and the person reverts to a low mood once again.

That person binges to experience an overwhelming feeling of wellness, it takes that ‘crutch’ away and they will not cope on a day to day basis.

What is actually happening is that the sufferer becomes embroiled in a vicious cycle of binging and purging. This cycle leaves very little time for relationships, socialising and family! 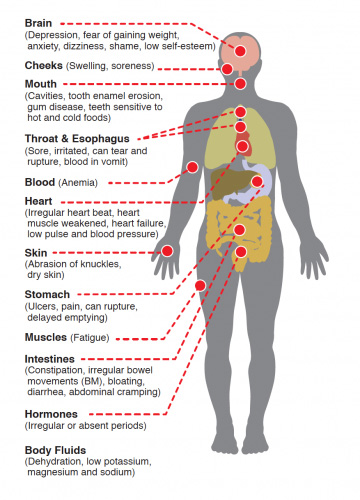 To help break the cycle and achieve nutritional goals change should be introduced gradually.

Meals should be based around individual food preferences initially and the individual may experience bloating which can be uncomfortable. However this is natural and as the body will adjust and the symptoms will reduce.

This is only temporary!

Start off by eating little and often.

High fibre or low sodium (salt) foods help control fluid retention and constipation. Limit gas producing and high fat foods. Begin the re-feeding process with foods that are easier to digest. A structured eating plan may be useful so you can know what you are eating in advance.

The goals of nutritional therapy for eating disorders are:-

Signs to look for in Bulimia

If 3 or more of these signs are present there may be cause for concern and it would be advisable to share your concerns with your GP or call our advice line.

Physical Signs to look for in Bulimia

Emotional signs to look for in Bulimia

What triggers a binge?

Keeping a diary can be very helpful when trying to identify the triggers that cause someone to binge, as well as helping you to work out how to bring the bingeing under control or have a degree of management over them.

For instance, binging is more likely:-

It may be difficult to cope with uncomfortable feelings without binging. If so, help should be sought and a support group may be helpful. Here are some ways to help control the urge to binge:-

Build on that. If you do someone a good turn, feel proud. If you want to treat yourself, then do it! Why? Because you’re worth it!

The first step to recovery is to acknowledge there is a problem! This is the biggest step forward.

Effort must be made to try and resolve the underlying emotional problems. Food can’t simply be avoided and it is more likely someone will binge if they deprive themselves of emotional support.

It is also medically unsafe to starve, binge and purge. Seek the support of your GP to monitor you physically. Ask for a referral to be made for emotional support and check out the services available via the local self help group.

Finally, take each day as it comes. Recovery can take a long time. Make steps small and achievable. Don’t set yourself up to fail by making your aims unrealistic. Focus on the positives and why it is important to you to get better.

GOOD LUCK! Help is a telephone call away!